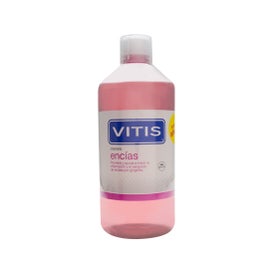 Removes redness and swelling from your teeth

Vitis® Gum Care Mouthwash for Gingivitis 1L is a mouthwash specially formulated to prevent and help treat inflammation and bleeding gums. It inhibits the formation of bacterial plaque (oral biofilm) and reduces its accumulation, thus controlling the appearance or development of gingivitis.

It is recommended for use in people susceptible to gum problems: inflamed, red and bleeding gums. Also, in people with delicate gums or with a predisposition to develop gingivitis such as pregnant women, diabetics and/or immunocompromised people, smokers, people treated with anticoagulants and patients on medication.

Suitable for people with coeliac disease.

Use mouthwash after thoroughly brushing your teeth. Visit your dentist a couple of times a year to check for cavities and dentin degradation.

I do recommend it.

Perfect for after brushing

I love that it doesn't have a super strong taste and the clean feeling it leaves in my mouth. It seems to keep my mouth hygienic longer until the next wash.

I have been using it for years. It is very good.

I already knew him, I recommend him

It's the one I normally serve

A different product has come to me, one that is far worse in quality and older.

I already knew him and I would recommend him

The quality of the product.

I have not yet tested the product

Very well priced and certainly a most effective product

My dentist sent it to me, because this one doesn't make my teeth yellow. That's good.

It is a pleasant mouthwash, without alcohol and without too much flavour